Koneswaram temple (Tamil: திருக்கோணேச்சரம், also known as Dakshinakailasha (Tamil: தென்கயிலை, Teṉkayilai, litt. Southern Kailasa) is a classical-medieval Hindu temple dedicated to Lord Shiva in Trincomalee, Eastern Sri Lanka. The temple is situated atop Konesar Malai, a promontory that overlooks the Indian Ocean, the nearby eastern coast (the Trincomalee District), as well as Trincomalee Harbour or Gokarna Bay. Konesvaram is revered as one the Pancha Ishwarams, of Sri Lanka for long time. Being a major place for Hindu pilgrimage, it was labelled “Rome of the Gentiles/Pagans of the Orient” in some records. Konesvaram holds a significant role in the religious and cultural history of Sri Lanka, as it was likely built during the reign of the early Cholas and the Five Dravidians of the Early Pandyan Kingdom.

Pallava, Chola, Pandyan and Jaffna designs here reflect a continuous Tamil Saivite influence in the Vannimai region beginning during the classical period. The river Mahavali is believed to be risen at Sivanolipatha Malai, {{lang|tm|Mount of Shiva’s glowing feet, and meets the sea near Konesvaram Rock. This formation is the basis of the myth that it is comparable to Ganges, in that it symbolically crowns the flowing of river from Shiva’s head to his feet.

Developed from 205 B.C., the original kovil combined key features to form its basic Dravidian temple plan, such as its thousand pillared hall – “Aayiram Kaal Mandapam” – and the Jagati expanded by King Elara Manu Needhi Cholan. Regarded as the greatest building of its age for its architecture, elaborate sculptural bas-relief ornamentation adorne a black granite megalith. In the medieval period, its multiple gold plated gopuram towers were expanded.

The Koneswaram Temple is one of three major Hindu shrines on the promontory with a colossal gopuram tower, but it stands distinctly on the cape’s highest eminence. The Pavanasam Theertham at the preserved Papanasuchunai holy well and the proximal Back Bay Sea (Theertham Karatkarai) surrounding Konesar Malai.

The complex was destroyed by the Portuguese Empire in colonial religious attacks between 1622 and 1624, and Fort Fredrick was built at the site from its debris. In 1632 Ati Konanayakar Temple was built, and housed some of its original idols, but was located away from the city houses.

Worldwide interest was renewed following the discovery of its underwater and land ruins, sculptures and Chola bronzesby archaeologists and Arthur C. Clarke. They were preserved through restorations, most recently in the 1950s. Granted ownership of villages in its floruit to form, the Trincomalee District, Trincomalee village is located on the cape isthmus within the compounds. The modern temple has been a source of conflict between the majority Sinhalese and minority Tamils due to its position in a geostrategically important area. Revenue from the temple provides services and food to local residents.

Koneswaram has many strong historical associations. The shrine is described in the Vayu Purana, the Konesar Kalvettu and Tevaram hymns by Sambandhar and Sundarar as a Paadal Petra Sthalam along with its west coast counterpart Ketheeswaram temple, Mannar, it is the birthplace of Patanjali, the compiler of the Yoga Sutras and was praised for its tradition by Arunagirinathar upon his visit. The Dakshina Kailasa Puranam and Manmiam works note it as Dakshina/Then Kailasam (Mount Kailash of the South) for its longitudinal position and pre-eminence, it lies directly east of Kudiramalai west coast Hindu port town, while it is the easternmost shrine of the five ancient Iswarams of Shiva on the island. Mentioned as a widely popular bay temple of the island in the Mahabharata, Ramayana and Yalpana Vaipava Malai, the Mattakallappu Manmiam confirms its sacred status for all Hindus. Kachiyappa Sivachariar’s Kanda Puranam compares the temple to Thillai Chidambaram Temple and Mount Kailash in Saivite esteem. Konesar Malai may have been the site where Yoga originated; some scholars have suggested that the worship of the almighty god Eiswara on the promontory is the most ancient form of worship existing.[1] Dr. Paul E. Pieris declared in 1917, at a meeting of the Royal Asiatic Society (Ceylon Branch), there was in Lanka five recognised ‘Eeswararns’ of Siva, which claimed and received adoration of all India. These were Tiruketheesvaram near Mahathitha, Munneswaram, Thondeswaram, Naguleswaram and Tirukoneswaram.

Origins and date of establishment[edit] 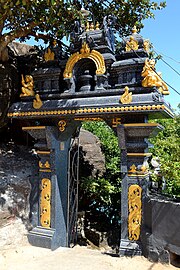 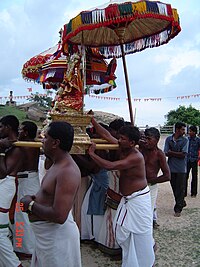 Koneswaram Idol Procession
Decorated gateway at partially restored Koneswaram (left). Koneswaram idol is taken on a procession around the temple, with pillar from the ruins in the background (right) 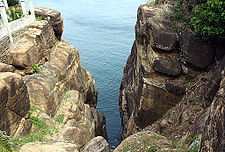 The construction time of Koneswaram has been estimated by comparison between carved reliefs on the temple’s ruins, literature on the shrine and the inscriptions commonly used in royal charters from the 5th to 18th centuries. Koneswaram was likely founded before 400 B.C. although its exact date of birth remains vague. The evidence extant attests to the shrine’s classical antiquity. Construction of Hindu temples was made possible due to the prevalent faith amongst the locals and mercantile communities in the region during the Sangam period. Kaviraja Varothiyan’s Tamil poem inscribed on the Konesar Kalvettu, the 17th century stone inscription chronicle of the temple, gives the shrine’s date of birth as circa 1580 B.C.Archaeologists point to its initial phase consisting of a rock cave, multilayered brick shrine style popularly constructed to Tamil deities of a range of faiths during the Sangam period (see Religion in ancient Tamil country). 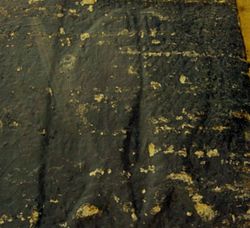 Jatavarman Veera Pandyan I’s double fish carp black granite bas-relief of the temple, reminiscent of the dynasty’s coinage symbols found on the island from the pre-modern era, installed after defeating the usurper Chandrabhanu of Tambralinga

Contemporary historians such as S. Pathmanathan and Paul E. Peiris suggest Koneswaram temple has a recorded history from 300, when it finds mention in the Vayu Purana.[15][18] Peiris notes that Koneswaram was one of the five recognised Iswarams of the Hindu deity Shiva in Lanka before the sixth century B.C.; a widely famous centre of deity worship long before the arrival of the mythical exile Vijaya to the island, attributed to the period 543—505 B.C. Koneswaram is the easternmost shrine of the Iswarams, the others being Naguleswaram (Keerimalai), Thiruketheeswaram (Mannar), Munneswaram (Chilaw) and Tenavaram (Tevan Thurai). The historian Diogo de Couto of the 16th century adds Ramanathaswamy Temple, Rameswaram to this group of principle temples in the region most revered on the Indian subcontinent. Other writers point to the worship of Eiswara by mythical royals on the island like Kuvenibefore the exile’s arrival. Pathmanathan differs from Peiris in his view on the shrine’s birth however, stating that Koneswaram temple was most likely established as a Hindu shrine by the mercantile communities that frequented the island from the fourth-century B.C. Kalinga region in India, where another temple dedicated to Shiva in the form Gokarnasvamin at Mahendra mountains is found. The Yalpana Vaipava Malai, an 18th-century Tamil chronicle connects the figure Vijaya and seven hundred of his followers to the shrine, stating they extensively repaired the five Iswarams upon their arrival to the island, before mixing with native tribes on the island forming matrimonial links with the Tamil kingdom through Pandyan queens. The Encyclopædia Britannica currently appears to follow this view, although in volume 10 of the encyclopaedia, printed in 1974, the shrine’s establishment is attributed to Tamil migrants.Encyclopedia Americana and New International Encyclopedia note that early Tamil rulers erected the temple of a thousand columns on the hilltop.

Ruins of the Koneswaram temple underwater

King Elara Manu Needhi Cholan in 205 B.C. and the prince Kulakottan of the Chola Dynasty extensively renovated the Koneswaram temple and the Kantalai Tank, responsible for irrigating plains belonging to the shrine. The latter’s reign is alternatively attributed to between 1580 B.C. and 1250. Due to royal patronage by various Tamil dynasties from the early classical to medieval era, the temple flourished in the early centuries of the First Millennium. Hindus built at least three great stone temples with gopura on Swami Rock during Koneswaram’s zenith, one to Vishnu-Thirumal, one to the goddess and the principal temple of the complex to Lord Shiva at its highest eminence.