Thuparamaya is an ancient Buddhist temple in Anuradhapura, Sri Lanka. Located in the sacred area of Mahamewna park, the Thuparamaya Stupa is the earliest Dagoba to be constructed in the island, dating back to the reign of King Devanampiya Tissa(247-207 BC). The temple has been formally recognised by the Government as an archaeological site in Sri Lanka. 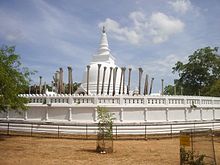 Mahinda Thera, an envoy sent by King Ashoka himself introduced TheravadaBuddhism and also Chaitya worship to Sri Lanka. At his request King Devanampiya Tissa built Thuparamaya in which he enshrined the right collar-bone of the Buddha. It is considered to be the first dagaba built in Sri Lanka following the introduction of Buddhism and also the earliest monument, the construction of which was chronicled. The name Thuparamaya comes from “stupa” and “aramaya” which is a residential complex for monks.

According to the Palumekichchawa Inscription, the tank called Madamanaka (Palumekichchawa Wewa) at Upala Vibajaka area had been constructed at a cost of 5000 Kahavanu and donated on behalf of the Bhikkus who were living at the Thuparama temple. It further states that the harvest from the paddy fields surrounding the tank was presented to the Bhikkus at the temple. The inscription is the earliest chiseled stone inscription in which the name of the Thuparama temple is inscribed, and said to be belonged to the reign of King Gajabahu (114-136 A.D.).

Buduruwagala – The Rock of Sculptures