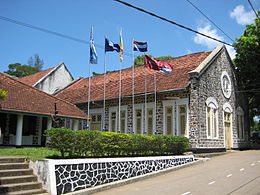 He was born as a twin in the Galle district. Wijeyananda Dahanayaka was educated at a well known educational institution in Southern Sri Lanka, Richmond College in Galle.

Dahanayaka was a member of the Lanka Sama Samaja Party before joining the administration of S. W. R. D. Bandaranaike, prime minister and leader of the Sri Lanka Freedom Party. He served as cabinet minister of education in the Bandaranaike Administration, from 1956 to 1959.

He took office as prime minister, cabinet minister of defense external affairs and education when Prime Minister S. W. R. D. Bandaranaike was assassinated in September 1959. He led the caretaker government for a year. His most notable action was the repeal of the Act which suspended capital punishment.

Dahanayaka contested the March 1960 General Election in Ceylon under the nomination of his newly formed Lanka Prajathanthravadi Pakshaya (Ceylon Democratic Party). He could not be re-elected as an MP, as he had lost his Galle constituency in that election.