Balanathan Benjamin Mahendran (20 May 1939 – 13 February 2014), commonly known as Balu Mahendra, was an Indian cinematographer, director, screenwriter and film editor who worked predominantly in Tamil cinema. Born into a Sri Lankan Tamil household, he developed a passion for photography and literature at a young age. After witnessing the shoot of David Lean’s The Bridge on the River Kwai (1957) during a school trip in Sri Lanka, he was drawn towards filmmaking. He graduated from the London University and started his career as a draughtsman with the Sri Lankan Government. In 1966, he moved to India and gained admission to the Film and Television Institute of India (FTII) to pursue a course in motion picture photography. Upon completion of his diploma, he entered Malayalam cinema as a cinematographer in the early 1970s.

After working in over 20 films as a cinematographer, Mahendra made his directorial debut in 1977 with the Kannada film Kokila. Since then, he directed over 20 films in a span of 36 years. Along with P. Bharathiraja and J. Mahendran, he is regarded as a trendsetter in Tamil cinema. During the tail end of his career, he established a film school in Chennai, which offers courses in cinematography, direction and acting. Following a brief phase of poor health, Mahendra died of cardiac arrest in February 2014.

Widely regarded as an auteur, Mahendra usually scripted and edited his films apart from shooting them. He was the recipient of six National Film Awards (including two for Best Cinematography), three Filmfare Awards South and several state government awards.

Mahendra was born in 1939 into a Sri Lankan Tamil family in the village Amirthakali near Batticaloa, Sri Lanka. Born to a professor father, he did his schooling at Methodist Central College and St. Michael’s College, Batticaloa. As a teenager, he was drawn towards films by his class teacher. It was during this time he happened to see Bicycle Thieves(1948) and Battleship Potemkin (1925). When he was at the sixth grade, he got an opportunity to witness the making of David Lean’s The Bridge on the River Kwai (shot in Sri Lanka) during a school field trip. Inspired by Lean’s personality, Mahendra determined to become a film-maker

Right from his childhood, Mahendra was interested in fine artsand literature. Upon completion of school, he joined the London University and graduated with a bachelor’s degree (honours) in science. After his graduation, he returned to Sri Lanka and worked in Colombo as a draughtsman in the survey departmentfor a brief period during which he edited a Tamil literary magazine titled Thyen Aruvi. In Colombo, he worked as an amateur drama artist with Radio Ceylon and got acquainted with the Sinhala theatre groups.

Mahendra’s passion for cinema prompted him to leave for India and join the Film and Television Institute of India, Pune in 1966. He had to take up cinematography as he could not gain admissions to other disciplines. At the institute he was exposed to world cinema as he got an opportunity to watch films made by François Truffaut and Jean-Luc Godard, both associated with the French New Wave movement. In 1969, Mahendra graduated from the institute with a gold medal. 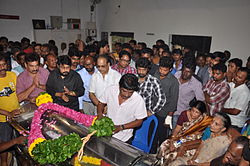 Mahendra was married thrice. He was first married to Akhileshwari with whom he had a son. His relationship with actress Shoba ended in 1980 after she committed suicide following their marriage. Upon her death, the media speculated that Mahendra was responsible for her death. Following that, Mahendra wrote a series of “sentimental musings” in the Tamil magazine Kumudam under the title Shobavum Naanum (lit. Shoba and me). Their relationship was explored by K. G. George (Mahendra’s junior at the FTII) in his 1983 Malayalam film Lekhayude Maranam Oru Flashback. When the film was released, Mahendra said that the film had nothing to do with him and has not discussed about it with George. In 1998, he married another actress Mounika and declared their marriage publicly in 2004.

Following a heart attack on 13 February 2014, Mahendra was admitted to Vijaya Hospital in Chennai where he was declared dead after six hours of cardiac arrest. Shortly after the news of his death, members of the Indian film industry posted their condolences in Twitter and Facebook. The Tamil film fraternity mourned the death and paid homage to him at his “film school” in Saligramam, Chennai, and decided not to work on the following day as a sign of respect. The last rites of Mahendra were performed at Porur crematorium on the same day.